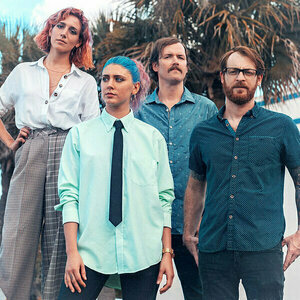 The concept and writing for Sandman Sleeps began over a decade ago with sisters, Alex and Cristina Peck in their childhood garage. Along the way, the sisters had explored different places, paths and played in other groups until reviving the band at their home base in Jensen Beach, FL in July 2019. Since then, the group has released two singles and have been actively playing shows in south Florida as a duo and with various drummers. The band solidified their lineup when Karsten Andersen and Zack Jones joined the group in early February of 2020. The quartet has cultivated a full, energy packed, and dynamic indie/art rock sound while maintaining a sense of rawness and unpredictability in songwriting and delivery. Sandman Sleeps has used the current quarantine times not only to isolate and protect but also to further pursue an explorative approach in writing and performance. The group plans to release a third single and debut the full band this summer of 2020.